The eight-round schedule comprises four gravel fixtures and three asphalt events. Details of the season-closing round are to be confirmed.

“This is a strong calendar of rallies which are popular with competitors and also proven fan-favourites,” said Jona Siebel after the dates were confirmed by the FIA World Motor Sport Council in Paris.

“We’ll take time to consider the calendar for future years, but it’s no secret we want a diverse fixture list which mixes new rallies with long-standing and well-liked rounds.”

WRC Promoter has owned the FIA World Rally Championship’s (WRC) commercial rights since 2013. Siebel said adding the ERC to its portfolio provided the opportunity to bring the two series closer.

“As well as an important championship in its own right, we view ERC as a WRC talent finder. We want the two series to fit like a hand and glove and we’ll simplify the path for competitors to progress from one to the other,” Siebel added.

The 2022 championship in detail

The season roars into action with a dirt double-header in Portugal. The opening fixture in the northern Fafe region in mid-March is followed two weeks later by a trip to the Azores islands in the mid-Atlantic.

The abrasive asphalt of Rally Islas Canarias is next up in mid-May, before the opening half of the season concludes on fast gravel roads in northern Poland a month later.

Latvia’s loose-surface tracks from Talsi to Liepāja launch the second half of the campaign on the opening weekend of July, ahead of popular asphalt events in Rome at the end of the month and in Zlin in the Czech Republic five weeks later.

The championship concludes at a still-to-be confirmed closing event. 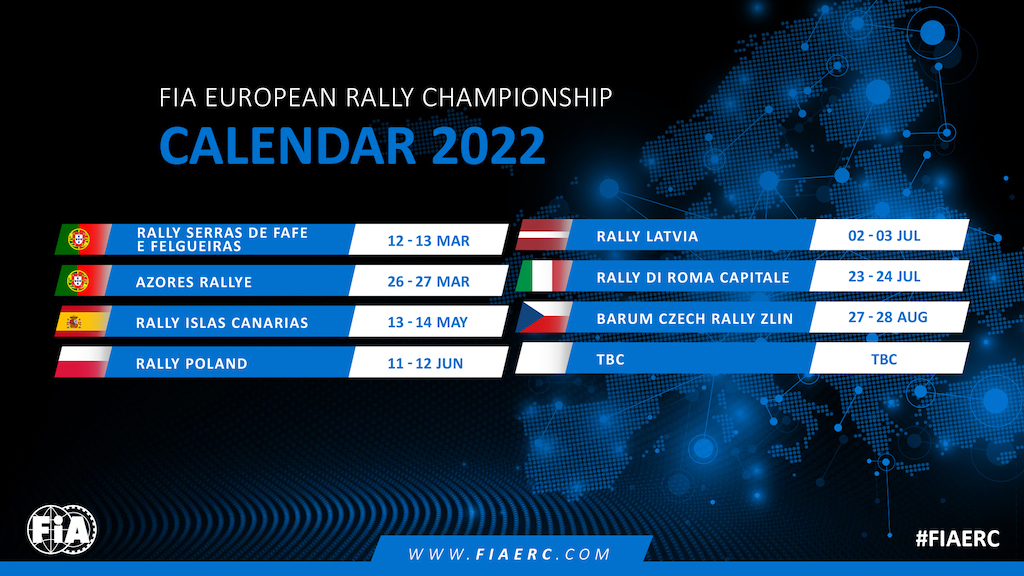